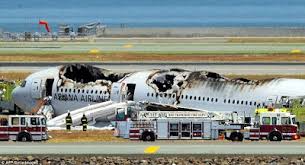 As the plane was supposed to land, it rose briefly as if it was trying to lift off again.

Lee had worked 18 years with Asiana Airlines and on Saturday, her skills were tested.

The plane slammed down with “great impact,” said Lee, who sat in the front.

“It was even more than a hard landing,” Lee, 40, said. The plane teetered left and right.

After striking the edge of the runway at San Francisco International Airport, the Boeing 777 tumbled into the ground, igniting flames and a trail of smoke. Its tail splintered off and parts of the plane peeled off as it skidded into the earth.

When the aircraft finally stopped, she noticed that the emergency inflatable slide located at the right side of the front door had deployed inside the plane.

Hailed as a hero who ushered passengers out of the Asiana plane, Lee was one of the 12 flight attendants on Flight 214.