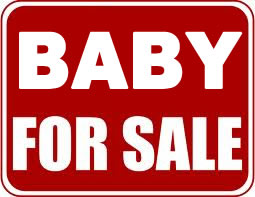 An Indian mother of three shocked the world when she offered to sell her unborn child.

The woman, identified as Pooja, justified her plans saying she wanted to pay off loans and build a house.

The incident took place in Yamunanagar district of northern state of Haryana. She placed an advertisement offering to sell her child in a popular Hindi language newspaper with her mobile number. As soon as the advertisement was published, a flood of phone calls followed. She says he must have received about 300 calls.

“My husband (a rickshaw puller now) incurred losses in business. We don’t have means to look after the three children. We have so much of loan to pay and need to build a house too,” she said.

What shocked many was that she agreed to talk to media and defended the unusual step.

While social activists slammed the government, the police said they could not do anything without a complaint.

The district administration said it had ordered an enquiry into the issue.

“It is nothing short of human trafficking for which the punishment varies between the minimum five year imprisonment and maximum being life imprisonment,” Ajay Chaudhary, a Gurgaon-based lawyer said.

Social activist Poonam Bhatnagar criticised the police saying they can take suo motu action without waiting for any formal complaint.

“Do police wait for formal complaint when they arrest robbers or criminals while planning a crime?” she questioned.

Apparently, despite being entitled to social benefits being poor, Pooja’s family has not received them.

Under a federal government scheme, those holding BPL (below poverty level) cards are entitled to Rs 75,000 (N203,964), for the construction of a house, as well as access to food grains and other essentials at a highly subsidised rate.

Sadly, BPL cards are allegedly often issued to the rich and the affluent while the poor are deprived of them.