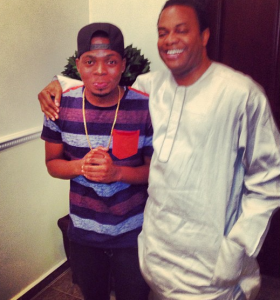 We have all heard the saying “Power pass power” right? Well if you haven’t then this is the best illustration of the saying.

Self acclaimed Baddo of rap music Olamide is never one to be timid or calm, check any of his photos and you can see the “Boss element” in him; but not this time.

In a newly published photo, Olamide is pictured with former Cross River state governor, Donald Duke. Olamide looks so innocent and humble in the photo that it makes me laugh, LOL!!

All the same, it isn’t a small feat to be hanging out with a huge political figure like Donald Duke. Olamide is definitely going places.