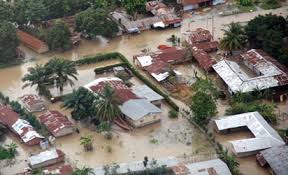 Fears of the people of Bayelsa State over the forecast by the Nigeria Meteorological Agency, NIMET of heavy rainfall and the attendant flooding in the coastal states, including Bayelsa, has been allayed by the State Government, saying that proactive measures had been taken to mitigate the impact of any flooding in the state.

Governor Seriake Dickson, who is billed to proceed on his two-week annual vacation, said aside the release of N500 million, his administration had put in place other measures aimed at cushioning the effect of the flood as well as reducing its severity on the people.

NIMET had predicted that this year’s flooding will reach its peak in August and September but the governor assured the people that they do not have any cause to fear.

Dickson noted that Post-flood Management Committee, Infrastructure and Inter-Governmental Flood and Relief Committee had been put in place to work out modalities aimed at preventing recurrence of flooding in the state and its effects on the people.

The governor added that work had commenced on the opening up of the water courses, construction of drainages and dykes in and around the state capital, while some structures are being elevated.

Speaking while presenting 500 million cheque to the members of the Inter Governmental Flood and Relief Committee at the Banquet Hall, Yenagoa, headed by the deputy governor, Rear Admiral Gboribiogha Jonah (rtd), Dickson charged the committee to liaise with other organs of the state towards harmonising response efforts as well as work closely with the communities towards the establishment of 50 relief camps in the state.

He called on the people to cooperate with members of the committees to enable them succeed in their assignment. [Vanguard]