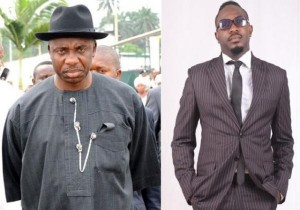 To the surprise of everyone, Gov of Rivers State,Rotimi Amaechi yesterday just approved the sum of $100.000.00 which is the total sum needed to get Music Producer OJB the required medical treatment he needs in India

All thanks to Jazzman Olofin, who was said to have visited Mr. Femi Davies, a top journalist and online publisher, themetronews, to complain about the way the people around are treating the issue of the prolific producer/singer.

saddened by details of the situation, Femi Davies made further plans to involve another top journalist – Mr. Wale Olaleye, This Day Political Editor and he was said to have asked Mr. Davies to come forth with a formal letter of request to be forwarded to Governor Amaechi.

As soon as the letter got to the generous governor, sources say he immediately signed it and ordered the state to pay as soon as possible.

As you are reading this, Governor Amechi’s State, Rivers, has finally restored the hope to OJB Jezreel and the entire music lovers in the country.

God bless Governor Amechi Rotimi for he has saved MUSIC!!!! 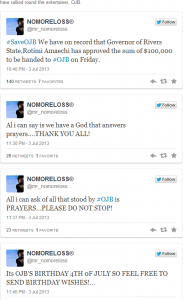