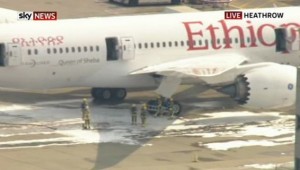 London’s Heathrow airport suspended both of its runways on Friday after a parked Ethiopian Airlines plane caught fire, but no casualties were reported.

“Both runways have been suspended after a fire onboard an Ethiopian Airlines plane,” a spokeswoman for the west London airport told AFP.

“Emergency services are currently dealing with the incident. No one was on board so there were no casualties.”

Footage show the jet parked close to what appears to be an airport terminal, surrounded by several fire trucks and there appeared to be damage to the top of the plane’s fuselage, with the Boeing 787 Dreamliner surrounded by pools of foam.

A second Boeing 787 Dreamliner was grounded at Manchester Airport one hour after the Ethiopian Airlines passenger jet caught fire at Heathrow.

The Thomson Airways 787 heading for Florida was forced to return to Manchester at 5.40pm today(Friday) due to technical issues.

The Thomson Airways plane, which took off at 12.10 today, was heading to Sanford, Florida when it was forced to return to Manchester Airport.

“Thomson Airways can confirm that flight TOM126 travelling from Manchester to Sanford, Florida experienced a technical issue and the aircraft returned to Manchester Airport, as a precautionary measure,” Thomson Airways, owned by TUI Travel, said in a statement.

The company added that passengers had disembarked and that its engineers were inspecting the aircraft in Manchester.

The incident occurred just days after Thomson got its first Boeing 787 Dreamliner.

Shares in Boeing fell over six per cent this afternoon, shortly after the incident was reported.

A company spokesman said Boeing are “working to fully understand and address this”.

“We’re aware of the event and we have Boeing personnel on the ground at Heathrow,” the spokesperson added.

Boeing temporarily withdrew the Dreamliner from service earlier this year for modifications after concerns that batteries on board could cause fires.