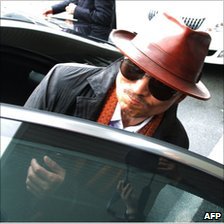 The restaurateur is demanding a refund of the protection money she paid gangsters affiliated to his group.

Her lawyers argue Shinoda has “employer liability” for the mobsters’ actions, as head of the umbrella gang.

The lawsuit makes use of an anti-organised crime law revised in 2008, which says heads of organisations can be held liable for damage done by its members and affiliate groups.

This is believed to be the first lawsuit of its kind in Japan, Kyodo news agency reported.

Her lawyers said that when she tried to withhold payments in 2008, a gang member threatened to torch her restaurant, Kyodo reported.

Japan’s gangs, also known as yakuza groups, are not illegal.

However, they are said to be involved in a range of criminal activities including drug dealing, prostitution and stock-market manipulation.