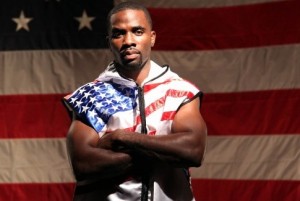 Gausha, who boxed in the 2012 London Summer Games, began wearing the American flag on his boxing trunks following his Olympic run. But he tells TMZ he’s done with that now in the wake of Zimmerman’s acquittal in the killing of Trayvon Martin.

“How can I wear my stars and stripes proudly in a country where they make a big deal out of Mike Vick fighting dogs; but not a young innocent black male’s life,” he said.

“When I represented my country in the Olympics I was proud to wear my flag,” Gausha added. “I even wore it on my head on the way to the ring. What happened this weekend was a slap in the face.”

Gausha says he refuses to rep a “nation with so much racism and hatred.”