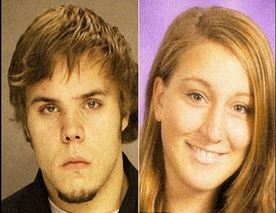 A man was arrested and charged with murder after sitting on his girlfriend’s head until she died, according to police reports.

A central Pennsylvania man suffocated his 17-year-old girlfriend, by sitting on her head after he intentionally drove into a guardrail at 100 mph in the middle of the night, officials said.

Police filed murder and other charges Friday against Benjamin Daniel Klinger, 19, for the death of Sammi Heller on an interstate near Manheim. Klinger is accused of crashing on purpose, then killing Heller by sitting on her until she suffocated.

“At first glance, this appeared to be just another tragic accident,” Lancaster County District Attorney Craig Stedman told a local Pennsylvania newspaper. “However, the police worked hand in hand with our forensic experts who saw this was as a much more complicated and sinister criminal scheme,” he added.

Based on medical records, the investigators concluded later that Klinger was pretending to be unconscious. Detectives recovered marijuana, cash, a digital scale, a pipe, pills and a black gun from the accident scene.

Several months ago Klinger faced a charge of simple assault for allegedly running over the foot of Heller and two counts of disseminating sèxually explicit material to a minor for allegedly sending photos and videos of Heller.