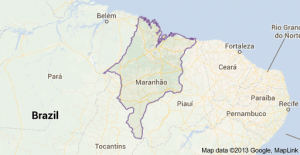 Santos Abreu is believed to have argued and then struck the referee after being unhappy with a decision.

It is believed the referee was carrying a knife throughout the match and fatally stabbed the player in retaliation.

Santos Abreu was rushed to hospital but died from injuries on the way.

Outraged by the incident, some spectators then apparently decided to inflict a gruesome revenge on the referee.

According to reports, the referee was tied up, beaten, stoned and quartered. They then put his head on a stake and planted it in the middle of the pitch.

One man, Luiz Moraes de Souza, 27, has been arrested over the incident. He has admitted to assaulting the referee but denied killing the man. Police are searching for two more suspects.

They are currently viewing video footage of the incident filmed by a witness with a mobile phone.

In a statement, the regional delegate of Santa Ines, Valter Costa, who is looking after the case, said: “One crime never justifies another crime. Actions likes this do not collaborate with the legality of state law.”