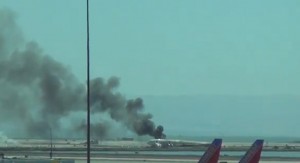 A plane has crashed at the San Francisco airport Saturday morning, according to reports.

Video of the crash was posted on YouTube and few details have been confirmed. Smoke can be seen billowing from the airplane in the video.

It is not known if anyone was hurt or injured. According to reports the Asiana Boeing 777 was flying to San Francisco from Taipei.

The aircraft has been identified as flight 214, said to have taken off from Seoul, the capital of South Korea.

Emergency services are already in place, with evacuation slides seen on side of the aircraft.