The prospect of reversing blindness has made a significant leap, according to scientists in the UK. 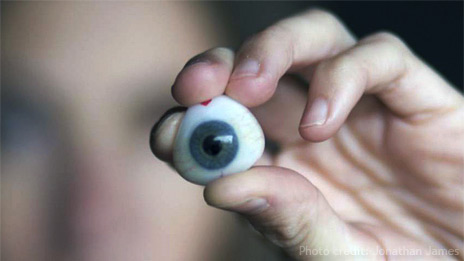 An animal study in the journal Nature Biotechnology showed the part of the eye which actually detects light can be repaired using stem cells.

The team at Moorfields Eye Hospital and University College London say human trials are now, for the first time, a realistic prospect.

Experts described it as a “significant breakthrough” and “huge leap” forward.

Photoreceptors are the cells in the retina which react to light and convert it into an electrical signal which can be sent to the brain.

However, these cells can die off in some causes of blindness such as Stargardt’s disease and age-related macular degeneration.

There are already trials in people to use stem cells to replace the “support” cells in the eye which keep the photoreceptors alive.

Now the London-based team have shown it is possible to replace the light-sensing cells themselves, raising the prospect of reversing blindness.

They have used a new technique for building retinas in the laboratory. It was used to collect thousands of stem cells, which were primed to transform into photoreceptors, and injected them into the eyes of blind mice.

The study showed that these cells could hook up with the existing architecture of the eye and begin to function.

However, the effectiveness is still low. Only about 1,000 cells out of a transplant of 200,000 actually hooked up with the rest of the eye.

Lead researcher Prof Robin Ali said: “This is a real proof of concept that photoreceptors can be transplanted from an embryonic stem cells source and it give us a route map to now do this in humans.

“That’s why we’re so excited, five years is a now a realistic aim for starting a clinical trial.” 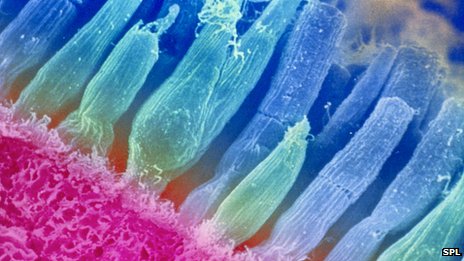 Rods and cones Rods, blue, and cones, blue-green, detect light and create electrical signals which are sent to the brain

The eye is one of the most advanced fields for stem cell research.

It is relatively simple as the light sensing cells only have to pass their electrical message on to one more cell in order to get their message to the brain, unlike an attempt to reverse dementia which would require cells to hook up with far more cells all across the brain.

The immune system is also very weak in the eye so there is a low chance of the transplant being rejected. A few cells can also make a big difference in the eye.

Tens of thousands of stem cells in the eye could improve vision, but that number of stem cells would not regenerate a much larger organ such as a failing liver.

Prof Chris Mason, from University College London, told the BBC: “I think they have made a major step forward here, but the efficiency is still too low for clinical uses.

“At the moment the numbers of tiny and it will take quite a bit of work to get the numbers up and then the next question is “Can you do it in man?”

“But I think it is a significant breakthrough which may lead to cell therapies and will give a much expanded knowledge on how to cure blindness.”

Dr Marcelo Rivolta, from the University of Sheffield, said the study was a “huge leap” forward for treating blindness and could have implications across stem cell research.