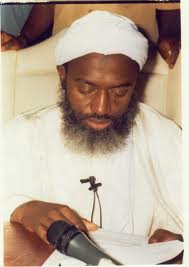 Renowned Islamic Scholar, Dr. Ahmad Gumi has been told to watch his utterances, the Christian Association of Nigeria (CAN) in Kaduna State said yesterday.

CAN was reacting to Gumi’s Ramadan tafsir aired on state-owned Capital Television in which the Islamic cleric was alleged to have made derogatory comments on Christians.

State secretary of CAN, Reverend Sunday Ibrahim said this at a news conference in Kaduna.

“Sheikh Gumi, during his Tafsir, said that Christians claim that Jesus is a son of God and that he is God and saviour, and that it is a wrong conception. This to us is a degrading comment on our saviour, Jesus Christ,” Ibrahim said.

“He went further to say that the more archbishops, bishops, pastors and general overseers in the country, the more iniquities in the society. We are not ignorant about his activities to cause trouble, war, conflict through his utterances.”

Ibrahim added that “Prophet Mohammed (Peace be upon him) never fought any Christian. In fact the prophet invited the Nazran Christians for a visit in Yathrib (Medina). And when it was time for their prayers, he offered them his Mosque.

“Secondly, when the prophet was facing persecution, he sent his followers to Abysinia, which is a Christian country for safety, believing that with the Christians they are secured.

“Thirdly, when the prophet was about to die, he came on a white horse to Mecca after addressing his followers to love one another; which he Gumi is not doing, and non Muslims.”