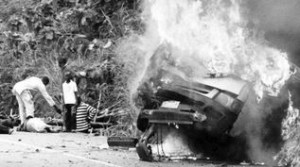 Tragedy struck in Benin, Edo State at the weekend when a car crushed the father of a groom, identified as Mr. Edward Airhiavbere, during a wedding.

The wedding, which attracted the cream of the social circles in the state capital, ended abruptly before the couple could say, “Yes, I do.”

Many of the confused family members and guests either shook their heads in amazement as they returned home or simply stood rooted to the spot.

The incident occurred about 9.30am on Saturday in front of the Registry of the Oredo Local Government Area, located just about 100 metres from the sprawling palace of the Oba of Benin.

The groom, bride and others in the bridal train wept profusely as the victim reportedly died on the spot before he could be rushed to the nearby Central Hospital’s emergency ward for treatment.

A young man, who attempted to re-park the car lost control of the vehicle and crushed the septuagenarian Airhiavbere, who sat behind a Toyota Camry car with registration number Edo BD 958 USL.

The victim was said to have died on the spot despite spirited attempts to save his life.

Also, the owner of the said SUV had not been identified at press time.