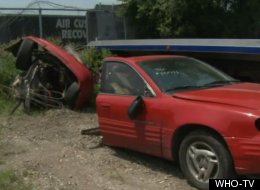 The driver of a 2000 Pontiac Grand Am that split in half after crashing into a utility pole in Des Moines, Iowa, also decided to split — and police are still looking for him or her.

The accident occurred early Sunday morning, and despite the fact that the car broke off into two pieces, the driver was able to walk away and avoid police interrogation.

“If someone had been in the back seat of this vehicle, they would not have survived this wreck. In the front seat, they apparently did,” Des Moines Police Sgt. Jason Halifax told WHO-TV.

The back part of the car was found resting against a split power pole and pieces of the car were scattered down the roadway. The front seat and engine were a short distance away, Halifax said.

“The front doors, I was told, actually could be opened and closed without a problem.Given that information it’s not totally unlikely someone could have walked away from that accident,” he told KCCI-TV.

Police initially had trouble figuring out the identity of the car’s owner because it was either just purchased or in the process of being sold, the Associated Press.

However, they have since figured out who the owner was and contacted her. The owner said the person who crashed the car was a house guest who borrowed the car without her permission, but she refused to give that person’s name to investigators,Yahoo! News reported.

The man who towed the car after it crashed admits he’s still haunted by the scene.

“I’ve never seen anything like this,” Adam Garris of G & S Services, the company that towed the 2000 Pontiac Grand Am, said, the Daily Mail reported. “That’s definitely one of the craziest accidents, one of the worst accidents I’ve seen.”