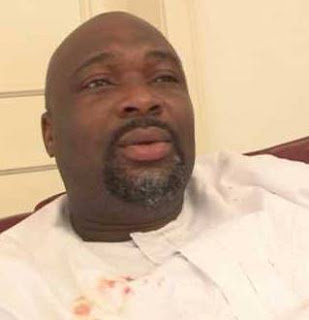 Emenike Ebete, counsel to Rivers State Lawmaker, Chidi Lloyd, says he fears for his client’s life based on claims that the police have hidden him in an unknown location.

Ebete told Nigerian Telegraph that he wants the public to be watchful so that what happened in the case of the late Moshood Kashimawo Abiola did not repeat itself.

“In Abuja, they told us they were transporting him to Port Harcourt to charge him for conspiracy and didn’t say more than that. When we got to Port Harcourt, there were more than five hundred policemen waiting to escort him to the command office. From there, he was moved to the Police officers’ mess and handcuffed like a common criminal. Now I do not know where he is,” Ebete said.

Eyewitnesses claim that Lloyd was blindfolded and handcuffed as he arrived at the Rivers State Police Command on Friday.

Meanwhile, the application by Lloyd’s legal representative, Belu-Olisa Mofor, praying the court to grant his client bail has been stalled with the Judge, Justice Esor Teetito adjourning further hearing on the application till August 6, 2013.

Lloyd has been detained by the Force Headquarters of the Nigeria Police since he reported in on Tuesday, and was brought to Port Harcourt, where he is expected to be taken to court.
The leader of the Rivers State House of Assembly was part of a fracas in the Rivers State House of Assembly on July 9. He was seen in a video, chasing a fellow law maker, Michael Chinda and assaulting him with the mace of the house.

Public Relations Officer of the Rivers State Police Command, Angela Agabe declined to comment on the matter saying she could not speak unless directed by those in higher authority.