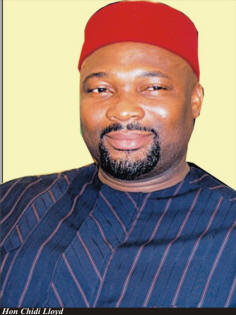 Twenty-six members of the Rivers State House of Assembly sympathetic to the cause of Governor Rotimi Amaechi on Sunday raised the alarm that Majority Leader, Mr. Chidi Lloyd, is going blind following his torture in the hands of men of the Nigeria Police.

They also hinted that they might involve human right activists and would go to international court if need be, to ensure that the fundamental rights of Mr. Lloyd is restored.

Lloyd has being cooling his heels in police custody since last Tuesday after turning himself in at the Force Headquarters, Abuja.

The police declared the Majority Leader wanted following his involvement in the July 9, 2013 violence in the State House of Assembly.

Addressing a press conference yesterday in Port Harcourt, Deputy Speaker of the Assembly, Mr. Leyii Kwanee, representing Kana constituency 1, said since “justice eluded” them in Nigeria, they were putting together a crack team of lawyers, who would challenge the human rights abuses against Lloyd.

He said, “We may seek justice towards ensuring that Chidi Lloyd’s rights are protected and his cause is also ventilated, probably in the International Court of Justice, if it comes to that. The Speaker will also draw the attention of the Commonwealth to the ugly development.”

The Speaker of the House, Mr. Otelemaba Dan Amachree is currently in Namibia for the conference of Commonwealth Parliamentarians.

Insisting that their colleague’s rights had been trampled on since he honoured a police summons in Abuja, Mr. Kwanee said, “We need to ensure that democracy is respected in Rivers State. Lloyd reported himself to the Force Headquarters, Abuja on Tuesday.

“As I speak with you now, he is being held up at the State CID by the same police authorities under the leadership of Commissioner of Police, Joseph Mbu. Lloyd was blindfolded, tortured and teargas was sprayed all over him.

“We have been refused access to him. Information reaching us indicates that he is going blind, occasioned by the teargas in his eyes. Medical help has also been refused him.”

He added that they had turned to God to seek spiritual intervention in the case.

He also described the Mr. Mbu as a “major” problem in the crisis in the state, insisting that there was need for the authorities to respect the decision of the National Assembly which ordered the Inspector General of Police to immediately redeploy the police chief from the state.

When reached for comments on the allegations by the lawmakers, the state Police Public Relations Officer (PPRO), Mrs. Angela Agabe (DSP), said “I don’t want to comment on that now.”