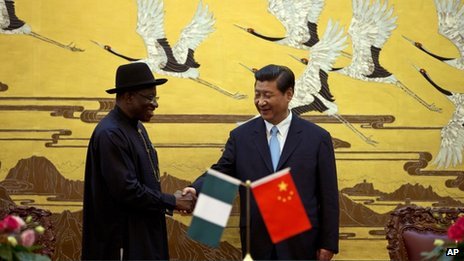 The money would help build roads, airport terminals in four cities, and a light-rail line for Nigeria’s capital.

China is investing heavily in Africa at it relies on it for oil and other natural resources.Nigeria is Africa’s biggest oil producer, but its infrastructure needs updating and most people live in poverty.

AFP news agency quoted Mr Xi as saying that both countries had been brought together by a common task of pursuing national development.

Mr Jonathan is leading a business delegation on a four-day trip to China to boost ties between the two countries.

Chinese companies are already building roads across Nigeria in contracts worth $1.7bn.

China’s demand for crude oil produced in Nigeria is expected to rise tenfold to 200,000 barrels a day by 2015, Nigerian officials said.