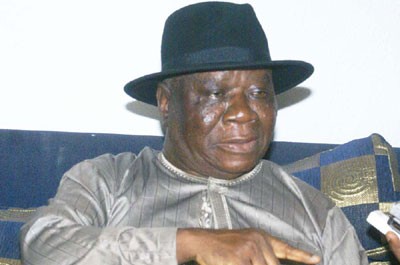 Governor Sule Lamido of Jigawa State has commended frontline Ijaw leader, Chief Edwin Clark for apologizing over his recent utterances which seemed to suggest that he was threatening the unity of the country.

The governor had engaged the elder statesman recently in a media war over President Goodluck Jonathan’s second term ambition but the former Federal Minister of Information called a truce weekend when he learnt that despite their differences, Alhaji Lamido sponsored the Jigawa state contigent to an invitational wrestling tourney in his honour in Delta State.

Gov. Lamido, who appreciated Chief Clark’s statesmanship, spoke at his residence in Abuja on Saturday night.

According to the Jiagwa governor: “All I can do is to show my admiration, because in our culture, a younger person cannot commend the older one. Therefore, I want to show my admiration for his statesmanship for offering a public apology to Nigerians for whatever might have been their perceived concerns and anger over his utterances.

“And I also appreciate his genuine concern by saying that all he was saying was not meant to threaten the stability and unity of the country. Therefore, again, I appreciate his genuine concern for the stability and unity of Nigeria that is how leaders and elders should behave. If elders and leaders will own up to their perceived mistakes, Nigeria will certainly overcome all these transitional concerns and grievances,” Lamido declared.