Residents of Lekki Phase 2 Estate , in the Eti Osa Local Government area of Lagos state, in Nigeria’s South West have appealed to Governor Babatunde Raji Fashola to come to their aid urgently to fix their deteriorating roads. 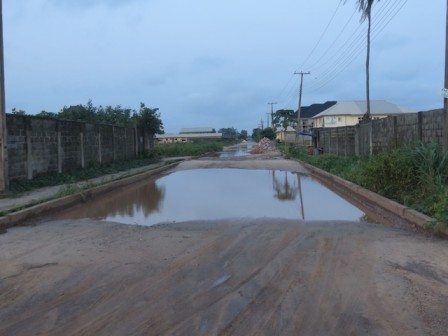 The residents made the appeal as almost all the major access roads to the estate and that provide links with the Ogombo Road, are now virtually inaccessible, as they are have been destroyed by gully erosion or trenches of water with depths that can swallow salon cars.

The residents pointed to Roads 14 and 15 and Laura Stephens Road that have now been abandoned as get-away roads because of their poor state and danger to motorists.

It was gathered from the residents that after several appeals, the New Town Development Authority(NTDA), the owner of the estate, promised to repair at least two of these roads early this year.

‘’But it only made cosmetic attempts and abandoned the effort”, said an official of the Residents Association.

According to investigation, residents are now left with Road 24 as their only link with the outside world and the impact of over-dependence on the road is already noticeable as potholes are emerging on the road at several points.

Governor Fashola was said to have visited the estate last month to commission a retirement home for civil servants.

But residents said the managers of the estate shielded the governor from seeing many of the bad roads that have now turned nightmares for residents.

According to some residents of the area, even the road that leads to the retirement home, is only good up to the home.

“Vehicles cannot make use of the rest of the road, beyond this point,” said one resident who said he had sent an e-mail to the Governor to let him know the misery the residents are experiencing.

A spokesman of the residents said he appreciated the enormous infrastructure challenges confronting the government of Governor Fashola, but said all the residents want for now is for government to make efforts to amend the roads and especially patch the ones that are showing signs of strains, before they get worse.