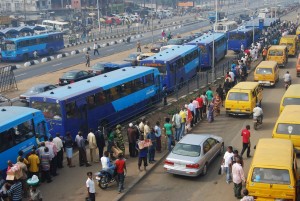 Lagos State Government through the state Metropolitan Area Transport Authority, LAMATA, regulator of the Bus Rapid Transit, BRT, will from tomorrow commence the use of e-ticketing payment as part of ongoing re-structuring of BRT’s operations and management aimed at enhancing effectiveness.

Disclosing this at the weekend, Managing Director, LAMATA, Dr. Dayo Mobereola, said the measure was part of a holistic plan at returning the BRT operations and experience to its once efficient and effective state when it was first launched in 2008.

Mobereola said the Lagos State Government was not unaware of the challenges that commuters using the current BRT system were experiencing, explaining that steps were currently being taken to ensure the restoration of efficient and effective service delivery on the system and increase its capacity.

According to him, the e-ticketing payment was a solution through a payment card named ‘Lagos Connect,’ and would offer commuters several options, saying, “with the e-payment system,Lagos Connect, commuters in Lagos will pay as low as N20 per trip instead of N70. They would not need to struggle for change or lose their money, and the system is safe and convenient.

Addressing the stakeholders which included commuters, dealers, management of the sponsoring organisations – Skye Bank, Eco Bank; staff and management of E-Purse, operators of BRT and Bus Franchise Scheme (BFS) and the media, Dr. Mobereola explained that the e-ticketing platform was scalable disclosing that it would be extended to rail services when the rail project is completed.

Explaining the concept of e-ticketing, Amiegbebhor said the system is a global fare payment technology embraced by all significant transport organisation and bus operating company in the developed countries of the world including BRT implementing nations such as Transmilenio in Bogota, Columbia; Curitiba in Brazil; and Ahmadabad in India. He said the application of the e-ticketing system has been proven to be a success in these countries.

After series of meetings, deliberations and consultations with the various strategic stakeholders, he said the conclusion was made that the BRT and BFS schemes have the capacity to embrace the e-ticketing system.

On the implementation plans, Amiegbebhor said the e-ticketing system will be implemented on BRT: Mile 12 – CMS and BFS: Maryland – Ikotun/Iyana Ipaja/Igando corridor as the system will provide opportunity for service integration between BRT and BFS.

Speaking further, he said the new system will various advantages to commuters, operators and all other stakeholders involved.

For the commuters, the new ticketing system would shortened transaction times at the various terminal and bus-stops, reduce cash handling for commuters, create opportunity for discounted bus fares, provide avenue for transport budget for regular users and create a feel for automated fare system.

For the operators, the system would reduce cash pilferage, checkmate ticket recycling and fake ticket, reduce the volume of paper tickets on hands by bus officer, and create operational decorum during boarding and alighting.

Under the pilot implementation phase, 30 BRT and 10 BRF buses have been installed with the e-ticketing validators while 150 test personnel across regular users of both schemes have been selected through random sampling. The selected test personnel spread across civil servants, students, market women, media and monitoring team of LAMATA among others.

To further broaden the pilot scheme, selected commuters were also given empty smart cards and questionnaires to participate in the implementation.

Dr. Amiegbebhor further explained what that they are expected to do: load their card at the various terminal and shelters with designated vendor with hand held machines; check out for buses with e-ticketing pilot test stickers for boarding, tap in while boarding and tap out as soon as the journey is completed, fill the respective questionnaires and revert to the designated LAMATA officers at the various terminal/ bus stops for collation. The submitted questionnaire is expected to be reviewed and analysed weekly by LAMATA and E-Purse for system updating.