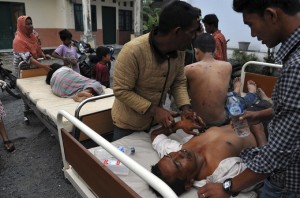 Officials say at least 24 people were killed and more than 200 injured by the quake, which struck the western tip of Sumatra island on Tuesday.

One report said six children were killed and 14 trapped under debris when a mosque collapsed in Central Aceh.

Indonesia is located on one of the most seismically active regions on earth.

He added that more than 300 buildings have been damaged in the quake. 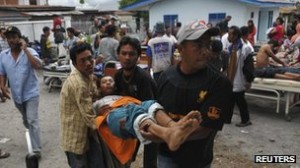 Soldiers and police have been deployed in rescue operations, but have struggled to access some areas where roads were blocked by landslides, officials said.

The Indonesian air force deployed a helicopter and a plane as part of the rescue efforts.

Officials say that the quake was felt for around 15 seconds, from Banda Aceh, the regional capital, to Bener Meriah, one of the worst-hit areas.

In Bener Meriah, about 300 people slept outdoors on Tuesday night as the area was hit by strong aftershocks and people were afraid to return to their homes, a local official told AFP.

“We have a power outage now and communications are unreliable,” he added.

In 2004, a magnitude 9.1 quake off Indonesia triggered a tsunami that killed some 230,000 people around the Indian Ocean.

Indonesia is prone to earthquakes due to its location on the Pacific Ring of Fire, an arc of volcanoes and fault lines encircling the Pacific Basin. [BBC]