The use of N95 million by the Delta State Commissioner for Housing to renovate two offices in Government House, Asaba, has triggered condemnation. 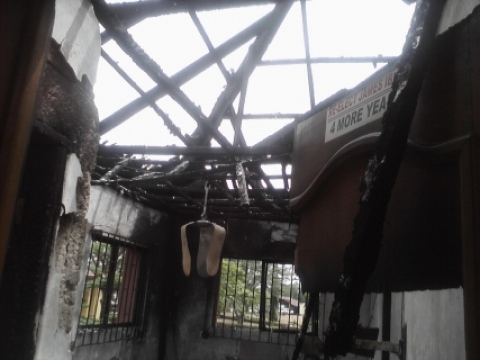 At a press briefing on Monday, Housing Commissioner, Paulinus Akpeki, disclosed that his ministry spent N27 million to fix the burnt office of Sunny Ogefere, the chief press secretary to Governor Emmanuel Uduaghan, and N68.6 million to repair a damaged section of Government House in Asaba, the state capital.

A mysterious fire in March, 2012 had gutted the office of the press secretary and a section of other offices in the press center at Government House.

Several government officials, civil servants and Deltans criticized the investment of the huge amount to renovate two areas. “It is a clear case of fraud and corruption,” one civil servant said.

Another source, a lawyer in Asaba, echoed the sentiment. “Would Chief Akpeki spend 95 million naira of his own money on these two jobs if the money came from his pocket?” the lawyer wondered.

Several government officials and civil servants said that the money Mr. Akpeki announced was enough to build new befitting offices. “Obviously, some individuals used the renovation budget to enrich their pockets,” said one of them.

Several Deltans who spoke during an interview also lamented the huge price tag of the renovations. A retired teacher who resides in Warri said, “We are lacking many basic amenities, but these government officials are spending money like water. They should know that they can be asked tomorrow to explain their actions.”

An Asaba-based medical doctor said he was disgusted by the news. “Some of these government officials are amassing wealth with impunity,” he said.