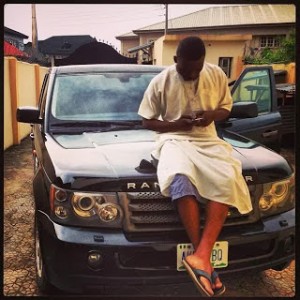 From experience, we have learned that simply because an entertainer is holding a set of car keys or sitting on the hood of a car doesn’t make it his or hers.

Sources claim that the Yoruba rapper who just signed a deal with Ciroc Vodka has acquired the new 2013 Range Rover pictured above but yet to be confirmed so lets not over-hype it!!