Rainstorms said to be the worst in five decades have flooded large areas of southwest Sichuan Province in China, triggering a landslide which has buried up to 40 people and destroying a memorial to victims of the earthquake that killed thousands in the same area five years ago. 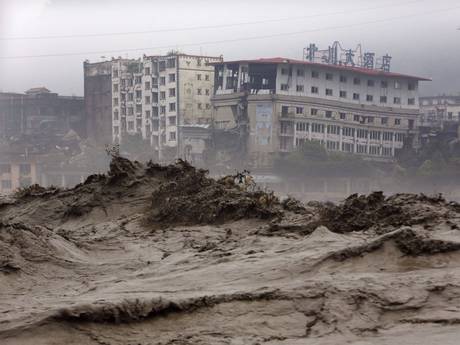 There was no immediate news on whether any of the 30 to 40 people buried in the landslide in the Sichuan province have survived. Rescue workers with search dogs are attending the scene, the official Xinhua News Agency reported.

State media reported that flooding in Sichuan has affected 360,000 people since Sunday, damaging or destroying 300 homes, and forcing at least 6,100 emergency evacuations.

The worst damage appeared to be in Dujiangyan, where a rain-soaked mountainside gave way on Wednesday, burying 11 homes and as many as 40 residents.

The official Xinhua news agency said rescue workers and search dogs from Chengdu, the provincial capital, were being rushed to the area.

The flooding also caused the collapse of an almost 50-year-old bridge in a neighbouring county, sending six vehicles into turbulent waters and leaving 12 people missing.

Mudslides and flooding are a regular occurrence in China’s mountainous areas and kill hundreds of people every year. Deforestation has led to soil erosion and made some parts of China prone to mudslides after strong rain.