Home National News Don’t Call Me For a Show If You Don’t Have 5M –...
Facebook
Twitter
WhatsApp 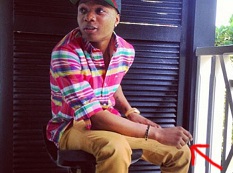 International singer Ayo “Wizkid” Balogun has finally opened up on the recently reported UNILAG fraud case. He also talked about his relationship with EME and his new album, he also confirmed that he replaced his damaged car with a new one, he further more stated that him and his crew don’t collect cheap money.. INTERVIEW BELOW:

What really happened between you and the UNILAG students. You were accused of duping them?

By now, I think all is clear that there are some people parading themselves as either Wizkid or his managers. The unfortunate incident regarding the UNILAG students is a case of mistaken identity where people fell victim to some unscrupulous elements who impersonated me or my representatives. The same people, as we have come to know, went as far as creating fake accounts in my name to dupe people. How did you come about the UNILAG palaver? Basically, the police just called us to inform us of the development. We can’t really give full details because we were invited to come to the police station and we went as law abiding citizens. When we got there, we gave our own statement as well as the students. But we really can’t say anything now until the police have done their proper investigations. But with the details on ground, what we want you to know is that the so-called Wizkid the students have been contacting is fake and an impostor. It’s really not from me or from anybody around me. What was your first reaction when you heard the news? I felt so bad. I just went to my Twitter account and tweeted the normal people to contact if you want to book a show with Wizkid. Let’s be realistic. Everybody saw my hustle and watched me grow. When I dropped “Holla Your Boy”, I was much younger and wasn’t charging up to N5 million for shows. This is just playing out and it is simple. So, how much do you charge now? N5 million is okay for my show. But let’s just put things right. It is so bad to my company’s name and my name as well. That is why I decided to open up on the issue.

There is this rumour that you are no longer with EME?

I have just released an album in collaboration with Wizkid and EME. “Starboy” is my new company, EME is still there for me. “Starboy” is Wizkid’s new record label and I have a couple of producers that are working with me in the new company. Definitely, we are working with a lot of people. Banky W and I, started way back. Our dreams have always been to build an empire, to help more people and give them that platform to showcase their talents. And all these dreams cannot happen only with one person. So, we have to branch out and reach out to more people. The industry is really big and there are more than 5 million kids out there roaming about the street and looking for a platform to showcase their talents. We want to give them the platform to do that. So, as you can see, everyone can contribute to that. Now that “Starboy” has started, we thank God, we are doing well. Anybody can start up something. That is just what we are trying to do with EME.

Have you released the track list of your latest album?

Yes, I have done that. I featured Olamide, D’banj and Banky W. The album is ready right now. But we are just putting some finishing touches to it. We will be having a listening party of the album very soon and we are going to announce that as soon as it is ready. We are planning for that. The album is coming out very strong and I thank God that I have put all the necessary things in place. I have a very strong belief that the album is going to win awards. There is this rumour making the rounds that you have replaced your accidented Porsche car. Is it true? Yes, that is absolutely true. We thank God for that. We thank Him for sparing my life. This is not the first time I’ve had such an encounter. That doesn’t mean I am a freak, but I needed to be mobile. I was moving around with a taxi all through the duration of the accident which is not proper.