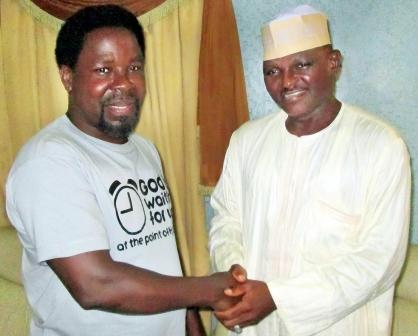 Senior Prophet and founder of Synagogue Church of All Nations (SCOAN), Prophet T.B Joshua, has refuted reports that he facilitated the release of Major Hamza Al-Mustapha from prison, saying he should not be dragged into the issue of politics.

The report also claims that President Goodluck Jonathan was told by the highly sought after Prophet, that if he wants to win re-election in 2015, he should ensure the release of the former Chief Security Officer to the late Head of State, General Sani Abacha, who was initially condemned to death by a Lagos High Court as well as bring back former Delta State governor, James Onanefe Ibori, who is serving time as guest of the Queen of England – behind bars – for corruption and money laundering.

In a statement seen on the official Facebook page for his ministries, TB Joshua said, “My attention has been drawn to an online article headlined ‘Pastor T.B. Joshua Revealed As Man Behind Al-Mustapha’s Release’ written by Sahara Reporters.

“This article is from the enemy. They should not drag me into the issue of politics. If I was ever to go to Aso Rock, I would go publicly. I have already told you how I met Al-Mustapha. Don’t put words in my mouth. I explained that I got to know him many years ago when a petition was addressed to General Bamaiyi who was the then Chairman of the NDLEA. I spent nine days with them for investigation and they found the whole thing to be a fabrication.

“From there, I was taken to see the president where I met Mustapha. I was able to reveal to them who I am by telling them what was to come as a prophet. I told him that he would spend several years in prison and would be finally released which no one else had ever told him. That is why you saw him coming here as his first port of call. Where there is no vision, people perish.”

The ‘Man of God’ decried the attempt to attach political undertones to Al-Mustapha’s visit to him immediately after his release from Kirikiri prisons just as he denied ever suggesting that Mr. Jonathan’s political fortunes at the 2015 presidential elections is tied to the freedom of former Governor Ibori.

“Count me out of the politics of hatred”, TB Joshua concluded.