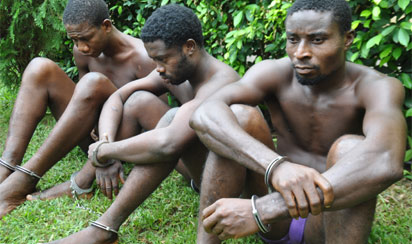 Three State Security Service (SSS) on Tuesday paraded seven suspects in Benin City among them members of a gang that kidnapped the wife, daughter and driver of a judge of the Supreme Court, Justice Bode Rhodes-Vivour, in May.

The other suspects paraded were three extortionists who threatened to kill their victim if he didn’t pay up and a musician, who was paraded for trafficking in persons.

Parading the suspects before Governor Adams Oshiomhole and the Press, the State Director, Directorate of State Service, DSS, Mr. Bello Bakori, said the suspects had confessed to the crimes.

He disclosed that Mrs. Rhodes-Vivour and her daughter were kept in a house in Upper Sokpomba, area of Benin City from where the kidnap suspects were arrested.

All the kidnap suspects hail from Delta State while the trafficker in persons is from Edo State.