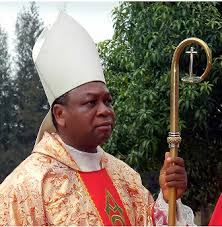 Call for the removal of the Catholic Archbishop, Bishop Augustine Akubueze by the Iyase of Benin Kingdom, Chief Sam Igbe and few Benin priests heightened tension at Benin Catholic Archdiocese, Edo State, at the weekend

Those calling for the Bishop’s removal based their call on what they described as the refusal of the “indigenisation of worship process” in Catholic churches in Benin by the Bishop.

It will be recalled that few Benin priests had called for the removal of the Bishop last week, alleging that he flooded the Diocese with Igbo priests and was implementing anti-Benin policies.

However, former Senate Chief Whip, Senator Rowland Owie and a Benin Priest, Pama Ikponmwonsa, disagreed and described the call as ungodly, retrogressive and diversionary, saying “Bini don’t forbid visitors and this is purely a religious matter and has nothing to do with tribe.”

Senator Owie said: “Let any one of them challenge me to a public debate on the stewardship of Archbishop Akubueze since his arrival.

“Apart from Bishop Gbuji, the evangelistic efforts of Akubueze in Edo South, which is the Archdiocese of Benin, is unprecedented in the Catholic Church. We should learn to give honour to whom honour is due to.”

Chief Igbe, who was flanked by other Benin Chiefs, however, accused the archbishop of doing things contrary to the Papal policy of promoting indigenous language and customs of the people.

He said that the use of local languages would, the Roman Catholic Church leadership believed, lead to wining more converts to the church.

Speaking on behalf of the Edo Liturgical Group, the Iyase said that there was a deliberate attempt to scheme Bini-speaking priests out of things by deliberately sending them abroad in the guise of training and replacing them with Igbo priests.