Home News Feed Edward Snowden: “My Actions Are Not Meant to Harm the US”
Facebook
Twitter
WhatsApp 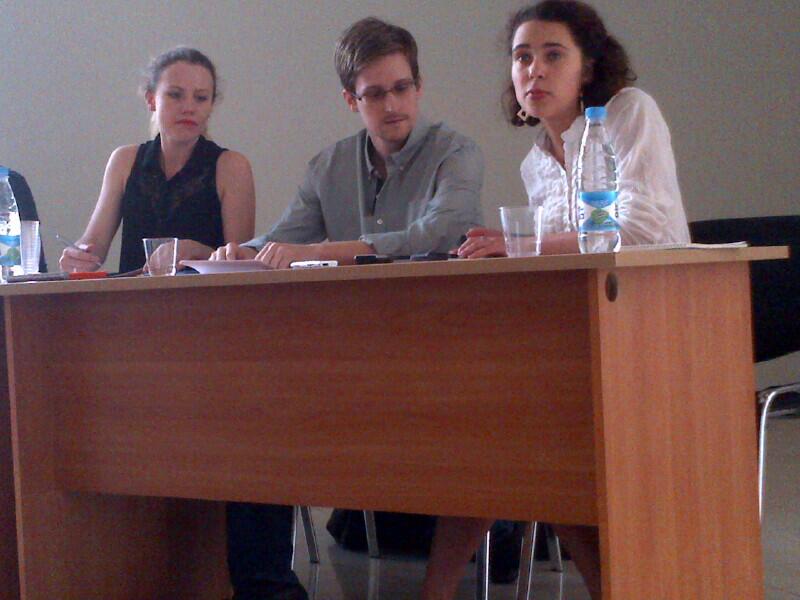 Flanked by Human Rights Watch researcher Tanya Lokshina on one side and WikiLeaks’ Sarah Harrison on the other at Moscow’s Sheremetyevo Airport, Snowden said he was applying for political asylum in Russia. He reportedly said, “I am only in a position to accept Russia’s offer because of my inability to travel.”

No video cameras were allowed in the airport meeting, but The New York Times’ Ellen Barry was in touch with Lokshina, who relayed Snowden’s words.

Russia has avoided taking a stance on Snowden’s asylum request, with President Vladimir Putin saying early in July, “If he wants to stay here, there is one condition — he must stop his work aimed at bringing harm to our American partners, as strange as that sounds coming from my mouth.”

Snowden responded to Putin’s condition Friday, saying, “No actions I take or plan are meant to harm the US. … I want the US to succeed,” according to Lokshina.

Lokshina said Snowden plans to submit an asylum request once again to Russia, though he plans to travel to Latin America eventually. He also thanked Venezuela, Bolivia, Nicaragua and Ecuador for their offers of asylum.

Snowden petitioned rights groups and the rights workers present at the meeting to plead his case, according to Lokshina.

Several Russian rights workers had confirmed they would attend the Friday meeting requested by Snowden in response to an “unlawful campaign” against him by the United States government.

Sergei Nikitin, the head of Amnesty International’s Moscow office, and Vladimir Lukin, the Kremlin-appointed human rights ombudsman, are among those who confirmed to Russian news agencies that they would accept the invitation to Moscow’s Sheremetyevo Airport, reportedly sent Thursday from an email address supposedly belonging to Snowden.

The note, which could not be verified, requested the attendance of a slew of well-known rights workers and lawyers “for a brief statement and discussion regarding the next steps forward in my situation,” according to a copy of the invitation posted by Human Rights Watch researcher Tanya Lokshina.

It was sent from the email address “[email protected],” according to Lokshina’s post, and signed “Edward Joseph Snowden.”

The whistleblower applied for asylum in more than 20 countries, though after a series of rejections only Venezuela, Nicaragua and Bolivia still appear open to hosting the whistleblower.

But it remains unclear how he would be able to leave the airport, where he is believed to have been hiding since his arrival in Russia on June 23.

US authorities revoked his passport as Snowden left Hong Kong for Moscow.

“Unfortunately, in recent weeks we have witnessed an unlawful campaign by officials in the US Government to deny my right to seek and enjoy this asylum under Article 14 of the Universal Declaration of Human Rights,” the note said.

Respected Russian lawyer Genri Reznik speculated that Snowden, should the meeting prove to be genuine, may ask to remain in Russia, news agency Interfax reported before the meeting took place.

Presidential spokesman Dmitry Peskov told Interfax that no representatives of the Russian government were invited, and that the Kremlin has nothing to do with Snowden.