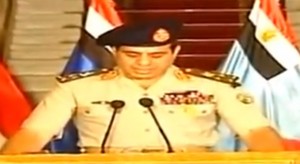 The Egyptian military on Wednesday removed Islamist President Mohammad Mursi from power and named the chief judge of the Constitutional Court as the country’s interim president.

Defence Minister Abdul Fatah Al Sissi said that an address given by Mursi on Tuesday, in which he refused to step down in response to opposition protesters, prompted the army to intervene.

“We agreed on an initial roadmap, which does not exclude anyone,” Al Sissi said in a televised statement after a crisis meeting with the country’s political and religious leaders.

According to Al Sissi, the roadmap includes the temporary suspension of a controversial constitution until it is amended by an independent panel. He added that a government of technocrats will be created during the transitional period.

“Executive measures will be taken to integrate the youth into the state institutions,” said Al Sissi. The youth opposition Tamarod movement spearheaded a campaign demanding Mursi to step down and call for an early presidential elections.

Mursi took office last June after winning the country’s first democratic elections. Al Sissi said that an early presidential election will be held. He did not announce a date.

“The Armed Forces appeal to the great Egyptian people of all leanings to demonstrate peacefully and avoid violence,” said Al Sissi, warning that any violation will be met firmly by the army and the police. Mursi’s whereabouts were not immediately known. Muslim Brotherhood however said Mursi has been detained in a military facility after he was separated from senior aides.

Anti-Mursi protesters, gathering in Tahrir and outside the presidential palace, erupted into jubilation. Celebratory shots reverberated across Cairo. 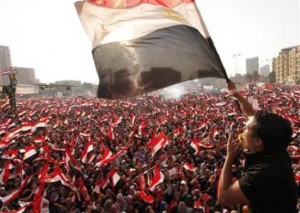