Governor Of Ekiti State Kayode Fayemi has revealed that the Funmi Olayinka Cancer Diagnostic Centre will be completed in October. 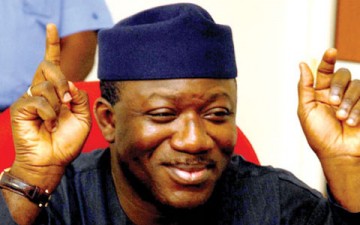 Chief Press Secretary to the Governor, Mr. Olayinka Oyebode confirmed the date in a recent statement., Fayemi made the promise in Ibadan on saturday at the 60th birthday lecture of Mrs. Betty Akeredolu, wife of the Action Congress of Nigeria Governorship candidate in Ondo State, Mr. Rotimi Akeredolu (SAN).

The centre will be named after the former Deputy Governor of Ekiti State Mrs. Funmi Olayinka who lost her life on April 6 after being diagnosed with breast cancer.

He said the centre would be equipped with mammogram and other necessary equipment as well as experts in oncology.

Stressing that Ekiti State was committed to the well-being of its citizens, Fayemi said the state government had a few months ago conducted free cancer screening for its citizens to enable them to know their cancer status.

He urged governments at all levels in the country to focus on primary health care, noting that it remained the fastest and the easiest way of detecting cancer and other diseases.