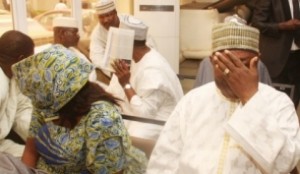 A Federal High Court in Abuja, yesterday, granted bail to the former Director of Pension Accounts in the Office of the Head of Civil Service of the Federation, OHCSF, Dr Sani Teidi Shaibu, to the tune of N500 million. An accomplice, a former bank manager, Mr Udusegbe Omoefe Eric was also granted bail.

The duo who are answering to a 22-count criminal charge bordering on conspiracy, fraud, breach of public trust and obtaining by false pretense, were on June 7, arraigned before the high court by the Economic and Financial Crimes Commission, EFCC.

EFCC had earlier revealed before the court how the accused persons used seven Bureau De Change operators and stole pension funds, adding that during the investigation process, one Mohammed Muhamud, owner of Muha Motors, who it said volunteered statements on 16/2/2011 and 31/5/2011, confessed that Dr Shaibu, at various times, used his bank accounts to transfer huge sums of money to another account operated by one Chief Anthony Azewaputa, who EFCC said facilitated the purchase of “Brifina Hotel”, for the first accused person.

The ex-pension boss who have spent thirty-nine days at Kuje Maximum prison and was said to have connived with a former manager with the defunct Oceanic Bank Plc, Mr Udusegbe Omoefe Eric, and diverted about N5 billion meant for pensioners across the federation, was further directed by Justice Adeniyi Ademola to produce two sureties in like sum.

The court also released his alleged accomplice, Eric, on the same bail terms, stressing that the sureties must be owners of landed property within the jurisdiction of the court.

Besides, the sureties are to deposit the title deeds of their property with the Deputy Chief Registrar of the court.

“The accused persons should equally deposit their travelling documents with the court registrar and must not travel without the permission of the court. If the travelling passports are already with the court, they should be transferred to the registrar of this court,” the judge said.

In the event the accused persons fail to meet the conditions upon which they were granted bail yesterday, Justice Ademola said they should be returned to Kuje prison.

He adjourned hearing on the substantive case against them till October 23.