Governor Babatunde Fashola of Nigeria’s Lagos State said the government planted 4.6 million trees in the last six years as part of move to mitigate the impact of climate change. 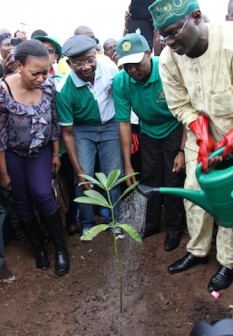 Fashola disclosed this at the 2013 Tree Planting Campaign at Total Filling Station, Mangoro, Agege, Lagos, Southwest Nigeria, saying that the government had targeted planting 1 million trees in 10 years when it launched the tree planting campaign in 2008.

According to him, the government had surpassed its expectation by planting such large number of trees in six years.

“We did not do it alone, this achievement was made possible because the people of the state embraced the tree planting initiative.

Today, I want to let you know that we will not relent; we will continue till our environment, our heritage and collective property is restored to its glorious state”.

“The result of the trees planted so far was evident last year as the state was spared the heavy flooding which ravaged many states last year.

It was not by coincidence, it was a result of our collective efforts at preserving nature to prevent her wrath,” he stated.

The governor added that the tree planting exercise was designed with the sole aim of awakening the consciousness of every Nigerian on the unique role trees and other plant communities played in making the environment conducive for human habitation and to encourage everyone to plant and protect trees.

On the theme of this year’s campaign, which is: Green is Peace, Fashola said it was in recognition of the fact that the absence of enough green, especially trees, was a threat to the survival of all creatures that depended on oxygen.

“We need trees to absorb the carbon dioxide in the atmosphere to prevent us from suffocating,” he said.

Fashola disclosed that his administration had gone a step further to import new species of trees from India to plant in the state, adding that “we also brought in about 1000 seedling some of which will be planted today.”

Commissioner for the Environment, Tunji Bello said tree planting was one of the remedies deployed by the state government to combat the menace of erosion as well as other ecological problems.