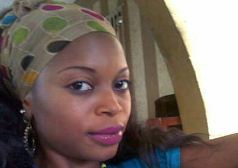 The circumstances is still shrouded in secrecy but facts at the disposal of OluFamous.Com is that the female student of Ladoke AkintolaUniversity of Technology who was found dead behind a guest house was killed for ritual purposes. Her name is Oluwaseun Adaramoye, Seun for short.

Her breast, private part and others were cut off. Below are the facts:

Seun left her home on Friday for her boyfriend’s place, who is also an undergraduate of the institution. He was said to have arranged with her to accompany him to a party somewhere in town.Trying to play smart, the boyfriend later went to her friends and told them Seun had been missing for a few days and he was looking for her. Shortly after, her corpse was discovered behind the guest house.
Sources say as soon as the guy discovered that her body had been found he made attempt to escape but ran out of luck as he was nabbed and handed over to the Police.In his statement to the Police the guy claimed that he had been out of town for some days, not knowing that Seun had told her her roommates she was going to spend time with him on Friday.Consequently, OluFamous.Com gathered that policemen stormed the guy’s room for a thorough search that lasted about 40 minutes. The search yielded results as they recovered Seun’s pantiés and native calabash in his wardrobe. As at the time of posting, the police was interrogating the boyfriend in order to track down his accomplices.Ladies just have to be careful, many people are desperate these days.