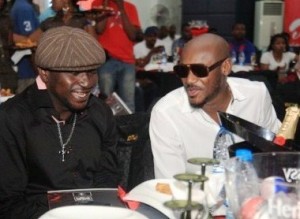 The bad blood between former Plantashun Boiz, blackface and music icon Tuface, has finally come to a head.

It’s no longer news that Blackface has totally phased out of music existence as nobody even remembers his name, or that former Plantashun Boiz member Faze is having a hard time but at least he is still making music and doing very well for himself.

The story still hasn’t changed as Blackface is still claiming that he was the mind and brains behind Tuface’s 1st hit “African Queen”. Blackface has been saying it for years but nobody seems to be listening, not even Tuface.

Blackface has come forward again and is telling anyone who knows Tuface to beg him to pay up the debts he owes as part of revenue from the song. Tuface has turned a deaf ear to all his claims as he himself is claiming ALL rights to the hit song.

People really noticed the bad blood between the two former band mates as Blackface’s absence at Tuface’s wedding in Dubai was very obvious; when asked why, Blackface said that he does not go to places he was not invited to.

“I still haven’t received any payment from 2Face because they have to backdate it; they have to check the revenues of the music, what it has generated, what is due to the co-writer and all that; all those things are just still hanging, but I still have one or two things that I am doing to find out what the issue behind all these stuffs are,”  he singer said recently.