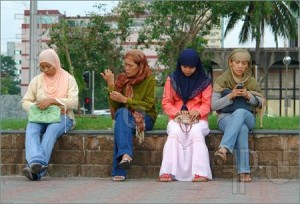 Philippine’s Minister of Education has said government directive for female Muslim teachers to take off their face veils in class is not mandatory nor meant to curtail religious rights.

Education Secretary Armin Luistro issued guidelines last week on wearing the “niqab” in schools, intended mainly for the southern Philippines, where most of the country’s Muslim minority live.

“I want to make it clear that the Department of Education order was not meant to impinge on the religious rights of Muslim teachers,” Luistro told AFP.

He emphasised the directive was worded as a “request”. There was initial confusion because the guidelines were entitled an “order”.

“If they feel that strongly about it, then they won’t be forced to do it. There will be no penalties imposed,” Luistro said.

According to him, the reason for wanting the face veil lifted was so that teachers could be better understood, with students able to read their lips as well as hear their words.

Many Filipino Muslim women traditionally wear the “hijab” veil which covers their hair and ears, neck and chest.

But some of them additionally wear the “niqab” which covers the nose, cheeks, mouth and chin, leaving only their eyes exposed.

The guidelines for Muslim teachers refer only to “the veil that covers the entire face”.

The education ministry said it employed 1,635 Muslim teachers to teach 166,000 students for its Arabic Language and Islamic Education programme, though it did not provide the total number of women in the list.

The programme is in place in 849 schools across the Catholic-majority country, with most located in the Muslim regions of the south.