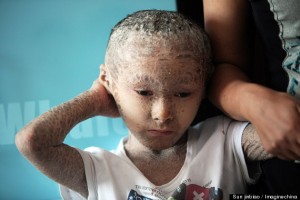 Known as “Fish Boy” by locals in the Eastern China province of Wenling, little Xianhang is covered head-to-toe in thick, itchy scales.

Diagnosed at birth with the rare genetic disease Ichtyosis, Pan has lived his whole life with unbearable pain, often suffering from overheating and extreme itching.

According to the Argentine newspaper, El Periodico, Pan’s mother says the young boy just wants to attend school without itching.

His severe skin abnormalities have affected the shape of his eyelids, nose, mouth, and ears, while also limiting movement of his arms and legs, Imagine China reports.

It is estimated that each year, more than 16,000 babies are born with some form of Ichthyosis, varying in severity of symptoms, according to Foundation for Ichthyosis & Related Skin Types.

While there is currently no cure for the disease, cold water can alleviate the symptoms of overheating and a thick cream can help to prevent the skin’s cracking. Doctors are currently looking into other ways to treat the boy.

Pan is not the first to make headlines for this stifling disease.

Metro reports on a 2012 documentary called ‘The Boy They Call Fish’, which highlighted the story of a severely mentally handicapped 18-year-old Vietnamese orphan, Minh Anh, who suffers from the same disease in a special ward of a Saigon hospital.