Gunmen have attacked a complex housing Pakistani security agencies in the southern town of Sukkur, killing five people and wounding more than 30 others. 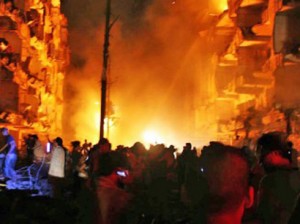 Four explosions were heard in the area where “terrorists” had seized control of one government building, Pakistan’s PTV reported.

Another building was under fire and the wall of a third had collapsed, it said.

PTV said five people had been killed and 38 injured, and that gunfire was continuing in Sukkur, more than 1000km south of the capital Islamabad.

Javed Odho, a senior police officer, told AFP the attack took place in an area where Pakistan’s ISI agency, the police and paramilitary have offices.

“Armed people have attacked. Apparently it is an organised terrorist attack, we have sent heavy contingent of police to the site,” he said, speaking by telephone from the town.

There was no immediate claim of responsibility. Pakistan’s ISI and government security forces are frequent targets for the country’s umbrella Taliban movement waging a domestic insurgency.

But Sukkur has been traditionally immune from such violence, more frequently seen in the northwest on the Afghan border or in Pakistan’s cities of Karachi, Lahore, Rawalpindi and Peshawar.