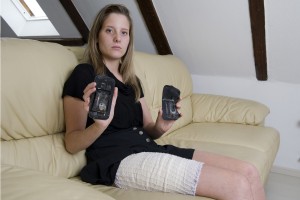 18-year-old Fanny Schlatter was at work, carrying her cellphone in her pocket when her Samsung Galaxy S3 reportedly exploded, Le Matin reports.

Schlatter, who lives in Switzerland, suffered severe burns on her leg and her pants had to be torn off . Samsung Switzerland is reportedly taking the incident “seriously.”

This is the third incident of an allegedly exploding Samsung product in the past two years. In 2012, a Dublin man said that his Galaxy S3 exploded in his car, and this past February a South Korean man alleged that his Galaxy Note’s battery (which was not attached to the phone at the time) caught fire.

Cellphones, and other electronics can, and occasionally do, explode. Over the years,multiple iPhones, at least one Android, and many non-smartphones have all exploded. One man even alleged that he was struck in the eye by a piece of glasswhen an iPhone exploded in his face. As Android Beat points out, two exploding Galaxy S3’s out of the more than 20 million sold isn’t a terrible average.