A teenager has been killed in Egypt after an Islamist mob threw him off a ledge on top of a roof and beat him as he lay dying, local media reports. 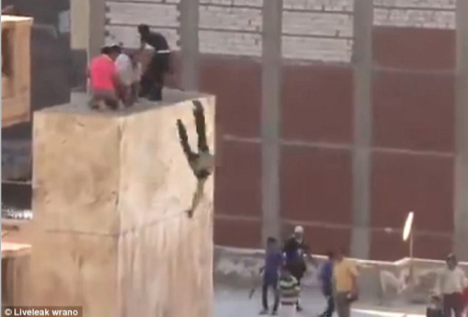 The young man, identified as Hamada Badr, 19, and his three friends were caught on camera hiding from a large group who had chased them onto a terrace in Alexandria.

The video, apparently filmed with a mobile phone camera from across the road, show the four teenagers escaping onto a 20ft ledge during violent protests on Friday.

The violent mob on the street appear to have chased them to the roof and the boys climb onto the structure as a group of agitated men gather around them.

The boys had been out celebrating the ousting of Islamist president Muhammad Morsi, when they ran into the former leader’s supporters, one of the boys’ father told Al Arabiya.

After both sides traded insults, the large group forced the boys to flee onto the building in Alexandria’s Sidi Jaber area.

As the teenagers huddle on top of the 20ft ledge the mob begin throwing rocks and larger items at them and attempt to climb after them.

A member of the aggressive roof-mob, a bearded man in a white top, is seen carrying a black-and-white al-Qaeda flag.

Shortly afterwards two of the boys are thrown off the ledge and are savagely beaten as they lay injured on the roof.

“Do you know the teen that they killed and disfigured his body and threw from the fifth floor is only 19 and four days,” Mohammed Badr, father of the killed teen, said.

‘”ll he was guilty of was that he was on the roof of the building, celebrating the ousting of Morsi. But the Brotherhood waged a war against whoever was celebrating Morsi’s departure.

“After throwing him, they wanted to do the same with the others, but people in the neighbourhood stopped them,” Badr’s father said.