A new group, the Media for Ethnic Equality (MEE), has passed a vote of no confidence on Dr. Frederick Fasehun of the Oodua Peoples’s Congress (OPC), urging Nigeria to desist from seeing him as one of the leaders and mouthpieces of the Yoruba people. 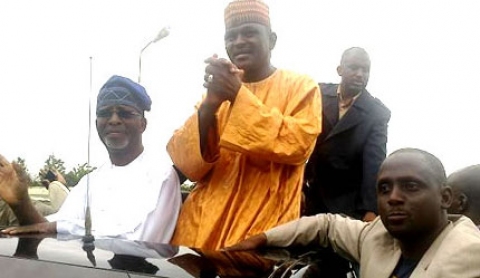 In a communiqué issued after a meeting of the group on the renewed confrontation between Chief Gani Adams and Dr. Fasehun over the role of the latter in the release of former hatchet man of late dictator, Sani Abacha, Col Hamza Al-Mustapha, MEE condemned in strong terms what it terms the “unholy association” and appealed to the Yoruba race to drop Fasehun as one of its mouthpieces and leader.

The group, which bemoaned the shoddy arrangement that led to the acquittal of Al-Mustapha, said it was painful that the arrow-head in a government that wasted the lives of so many journalists and notable Nigerians could be so freed with impunity on the altar of politicking.

“It is sad that the people in government and some desperate individuals could connive to settle for political gains with the blood of the heroes and heroines of our nation who laid down their lives for the enthronement of the democracy we are today celebrating. It is a sign of a collective resolve by the present ruling class to strangle patriotism and enthrone anarchy which we must all rise up to fight,” the group says.

The communique which was jointly signed by Gboyega Adeoye and Gbenga Soloki, Executive Director and Director of Publicity of MEE, respectively, called on members of the Oodua People’s Congress and the people of the Yoruba nation to renounce Dr Fasehun as a factional leader of the group.

“We are of the opinion that a true son of the soil in Yoruba land will not pitch his tent with a major actor in a government that made living a hell for Nigerians; a government that killed so many of our illustrious sons and daughters in cold blood. Fasehun has done similar thing before when he betrayed the OPC cause by hobnobbing with late General Sanni Abacha and later Chief Olusegun Obasanjo in 1999 when the OPC had aligned with other civil society groups not to participate in a military tailored transition.

“It was this betrayal of the group’s resolve that made many notable Yoruba indigenes, including the late Chief Gani Fawehinmi, to solicit support for Adams faction which is today the main engine that drives the OPC in South-West Nigeria,” the communiqué reads.

MEE also solicited for a total blackout of all activities relating to the Fasehun faction of the OPC in the media just as it called on media houses in the country to place a total blackout on Dr Fasehun and his Unity Party of Nigeria, UPN, stating that his mission in setting up the party after the one founded by the late sage, Obafemi Awolowo, is to further plunge the Yoruba into deeper ridicule.

“For a man who has chosen to betray his race to struggle for leadership of the nation at the ripe of his age, the desperation is better imagined than felt. The sad end of Kudirat Abiola, Pa Alfred Riwane, Bagauda Kaltho and so many martyrs, so numerous to mention, is still fresh in our memory and this is why we have to rise up to register our disapproval to the deadly moves of some elders who are scheming to mortgage our future, our heritage, for their selfish ends,” MEE said.

“We shall not be weary but shall remain dogged and resolute in this determination to support a just cause and fight all forms of greed and political shenanigans to a standstill.”