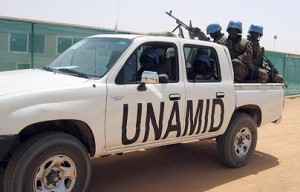 Seven peacekeepers have been killed in Sudan’s Darfur region, the African Union-UN Mission said on Saturday, the worst-ever losses in the five-year history of the operation.

A large group of unknown gunmen attacked a patrol in an area in South Darfur where peacekeeping is the responsibility of Tanzanian forces, the African Union/United Nations-led UNAMID force said. Reinforcements managed to rescue the peacekeepers after an “extended firefight”.

Unamid released few initial details of the incident, which it said happened near the peacekeepers’ base at Manawashi, north of the South Darfur state capital Nyala.

“It was a patrol that was going to Manawashi,” said UNAMID’s acting spokesman Christopher Cycmanick.

“Seven peacekeepers were killed and 17 were injured.”

Two of the 17 wounded soldiers and police officers were female, UNAMID said. It did not give nationalities but a U.N. source said most casualties were probably Tanzanians.

Violence has surged since January as government forces, rebels and Arab tribes, armed by Khartoum early in the conflict, fight over resources and land. Peacekeepers often get attacked when they try to find out what is happening on the ground.

Diplomats say the more than 16,000 peacekeepers are struggling with equipment problems, poor training of some contingents and the reluctance of some governments like Egypt to send their soldiers into dangerous areas.

The force has no joint command, which hampers coordination and rapid deployment to hotspots.

Around 300,000 people have been forced to leave their homes in Darfur this year by fighting, according to the United Nations.

The International Criminal Court has issued arrest warrants for Sudanese President Omar Hassan al-Bashir and some aides on charges of masterminding war crimes in Darfur. They deny the charges and refuse to recognize the court.