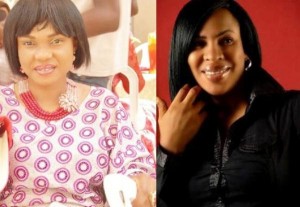 There was mild drama between two actresses, Iyabo Ojo and Fathia Balogun, during one of their colleagues, Toyin Aimakhu’s wedding.

If not for the prompt intervention of some colleagues in the movie industry, the low-key yet hyped wedding of Nollywood actress, Toyin Aimakhu to his Tinsel actor husband, Niyi Johnson would have been marred by drama.

This is because Fathia Balogun and Iyabo Ojo nearly disrupted the ceremony with a fight. If you think a man might be the cause of the brouhaha, then you are very far from the 411.

As we reliably learnt from eye witnesses, seniority claims led to the rise of their adrenalins.

It was gathered that Fathia Balogun first got to the event held on Monday, July 8, 2013 at Sabitex Hotel, Lekki, Lagos, after the marriage registry at the Ikoyi Registry, before Iyabo Ojo got there. It was while Iyabo was greeting her colleagues that trouble started, which led to a hot exchange of words between the two stars.

Those who claimed to be at the event said when Iyabo got to where Fathia was sitting, she allegedly called the former wife of Saidi Balogun by her name, which angered Fathia. She was said to have told others at the event to warn Iyabo from calling her by her name if she cannot add the prefix ‘aunty’ to her name as a sign of respect in Yoruba land.

Iyabo didn’t take this lightly with Fathia, who reportedly insisted on knowing what Fathia would do is she refuses to add the prefix to her name. The two were almost throwing punches at each other but for the quick intervention of their colleagues.

The fight for the ‘aunty’ prefix is not new in the industry. Lizzy Anjorin and Iyabo only settled their bitter fight of many years because of the same reason.

Efforts to speak with Iyabo Ojo on this issue proved abortive, as her PA picked and claimed she is on set. But  upon insisting the actress’ aide declined to give her the phone for us to talk to her on this story