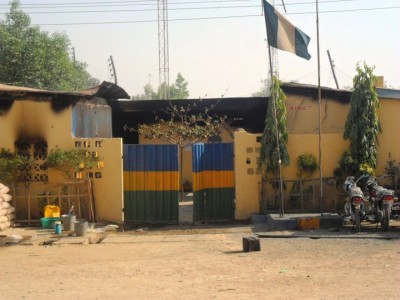 The attack on a bank and police station in Karim Town of Karim Lamido Local Government Area of Taraba on Friday night has been confirmed by the Taraba State Government.

According to Kefas Sule, the spokesperson of the state acting governor, Alhaji Garba Umar on Sunday, about 10 gunmen, who arrived the town in one car an five motorcycles, attacked a First Bank branch and police station.

“They used explosives to gain entrance to the Bank and also shot one of the security guards, he did not die and has been rushed to the hospital,” Mr. Sule said.

While he was silent on whether the attackers escaped with cash stolen from the bank, Mr. Sule confirmed that the gunmen attacked the police station in the town injuring one officer.

“They also opened fire on the police station, injuring one officer on duty, while the other officers ran away,” he added.

Mr. Sule, however, said the police men regrouped and repelled the attackers and that contrary to belief, no police officer was killed in the ensuing gunfight.

“The policemen pursued them to Mararraba and engaged them in a shootout, one of the attackers was shot, while another one was captured with a machete,” he said.


Mr. Sule said the attackers, after escaping from the police, came back some minutes later on a rescue mission.

“They came back, opened fire and rescued their colleagues from the police,” he said.