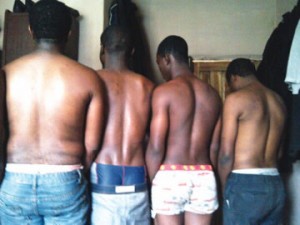 Men of the Apapa Police Division have arrested a pickpocket identified as Terry Umuokoro.

22-year-old Umuokoro was arrested last week at a hotel along Ojo Road, Ajegunle, Lagos. He had allegedly resided at the hotel for two months.

Also arrested were five others, suspected to have taken part in a robbery operation at Senator Muse Road, Apapa in June 2013.

Umuokoro however denied being part of any robbery operation. He said he was only a pickpocket.

“I pick pockets for a living, I am not a robber. I started in January 2013 because I had no job after completing my secondary school education,” he said.

Explaining how he operates, the suspects said he usually armed himself with a school bag to create the appearance of a university undergraduate.

He said he would then board as many commercial buses as possible, where he would pick the pockets of unsuspecting passengers. His loot included money and phones.

“I only steal Nokia phones because you can sell them easily. I steal about three phones daily and have a buyer at Boundary bus stop in Ajegunle. I give him the phones and get paid in return. I make about N10,000 daily,” Umuokoro said.

Umuokoro allegedly moved out of his family home to the hotel at Ojo road where a room goes at a rate of N5, 000 daily, as his became successful in his ‘business’.

The other suspects, Desmond Ozore, Solomon Mibien, Nelson Mbabie, Jamiu Adigun and Akeem Apejoye, were initially arrested at the same hotel by the Victoria Garden City Police Post after a Blackberry Bold 5 which was stolen from a resident at Senator Muse road, was found with Ozore’s girlfriend.

On June 4 2013, two buildings were robbed on Senator Muse Road and valuables such as Blackberry phones, laptops and money were allegedly taken by the armed robbers.

One of the stolen phones was traced to Ozore’s girlfriend who claimed that he had given her the phone.

Ozore said, “I am not a robber, none of my friends are. We are all into internet fraud. We stayed in the hotel because we need uninterrupted electricity.

Mibien however denied being part of the robbery gang and claimed he also bought the phone from another friend who is currently at large.