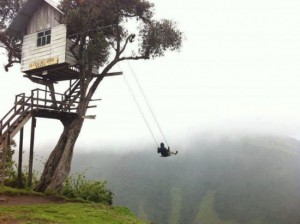 It’s called the Swing at the End of the World and it could literally be the end of you, as this extreme attraction in the mountains of Ecuador lets thrill-seekers swing over an abyss without any safety measures whatsoever.

Hiking up the path to Bellavista from the edge of Baños, Ecuador, you reach a viewpoint and a seismic monitoring station named La Casa del Árbol (The Treehouse). As the name suggests it’s a small house built in a tree, at the edge of a canyon. The view from up here alone is worth the trip, but for adrenalin junkies, La Casa del Árbol offers a unique bonus – a swing hanging over the precipice. Believe it or not many of the people who come here actually use it just to see what it’s like to swing into the void, and the internet is full of scary photos of them hanging over the abyss. It’s reportedly a great way to keep yourself entertained when the clouds block the view of Ecuador’s rumbling Tungurahua volcano, but just I can’t stop thinking about the possibility of one of the lines, or the thin metal beam supporting it breaking which would most likely cause the rider to fall to his death. I know, I’m a coward, no need to rub it in. 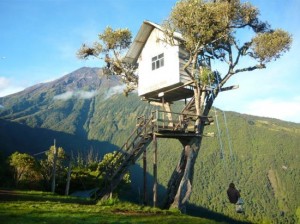 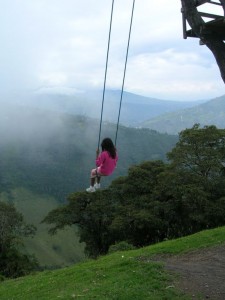 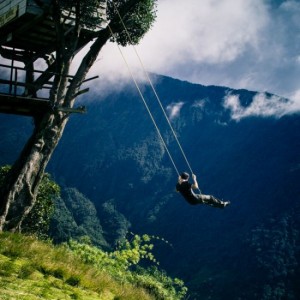