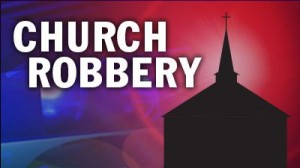 A 32-year-old bugler who allegedly has preference for churches around Oko-Oba area of Lagos has been arrested by anti-robbery policemen attached to Oko-Oba division.

The suspect identified as Sannu Umaru was reportedly caught in the act inside one of the Pentecostal churches in Oko-Oba at the weekend.

Umaru who claimed to be the son of a retired army personnel, told policemen during interrogation that he preferred stealing from churches because of the security lapses.

Preliminary investigation revealed that Umaru was allegedly involved in some robbery incidents in churches around the area. Before his arrest, he allegedly bugled a church where he made away with some musical instruments.

Police sources say, “on that fateful night, he scaled the fence of the church and went to where the musical instruments were. As he was about carrying the piano valued close to half a million naira, one of the instruments fell down and attracted the night guards who went for him.

“He jumped through the fence with one of the instruments he stole. But he was apprehended by residents of the area who were alerted by the the guards and was brought to the station. He was found to have also burgled another church within the week.”

Umaru who confessed in a statement blamed his indulgence on frustration, saying: “I was tempted to steal because of the death of my father. After his death, I went into scavenging but did not succeed. I chose to bugle churches because it is easier than any other place.

“Aside this, I do not need to be armed. I was scared of carrying arms and did not want to spill blood. That is why I considered stealing in churches as a gentleman’s way.

“What I do is, anytime I go there, I would search the offering boxes. At times I would find money inside, while at other times I would not.

“At Saint Barnabas Church, I did not find any money inside the offering box. So, I decided to steal their music instrument.”

Umaru has been charged to court, according to police sources