Bayo Bankole is known to fans as Boy Alinco. An actor on the Papa Ajasco television series, he is married to Olayinka. They share the secret of the 10-year-old union. 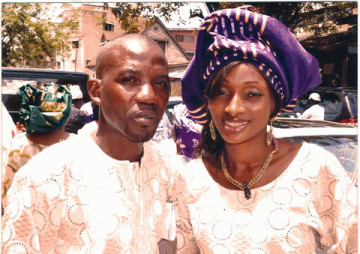 How did you meet?

Bayo: We met somewhere in Ibadan on the set of a movie and that was about 10 years ago, she came to the movie set with a small drama club from the University of Agriculture, Abeokuta.

Olayinka: We met at a location in Ibadan, my group organised a production and he was invited as a guest artiste while I went as a make-up artiste. When he walked into the set with his bow legs, people were hailing him as ‘Boy Alinco’ and they were getting very excited over his presence. I just moved and stood alone somewhere away from the crowd. He came to where I was standing and told me that he liked my confidence as I was the only person who did not come to greet him. I told him I did not have to make noise like others. If he wanted, we could meet and talk later. That was how we started talking.

What was the initial attraction?

Bayo: I saw an innocent girl reading a novel by the corner while every other person was just having fun. I discovered the innocence and the quietness which is one of the things one requires in a woman. She is also beautiful and I think she is brilliant too. That was what I needed to woo her.

Yinka: It was not love at first sight. Then there was no GSM and we communicated through emails, so I gave him my address and he came to Abeokuta. While we communicated, I came to understand that he had some hidden qualities that most ladies did not know about. I observed that he was humble, God fearing, hardworking, independent and straightforward. He is not one of the lazy men who go around looking for quick money.

So far, how has the journey been?

Bayo: It has been quite good and fun filled, although there has been ups and downs, we have acquired more knowledge along the line. As a man, handling a woman is not an easy task; it is bigger than the ambition of becoming a millionaire. The task of being a responsible man and trying to create a balance between the home, social life and more is not quite easy but to God be the glory. It has been wonderful and that has been because of the woman. I spend more time outside the home and she has been there always. She is taking care of the kids, still running and minding her own business. The relationship will go far because at the beginning, we were trying to understand each other but when a relationship goes on for 10 years it means that you have been able to maintain stability. The long years have helped in breaking barrier of individual differences.

Yinka: It is God who has sustained our marriage for this length of time. I am a woman who is connected to God and I don’t do anything outside His will. I depend on Him for guidance, counselling and wisdom and that has been able to help me as a woman. My husband is so plain, he has nothing to hide. I don’t go out with him most times but I can predict what he is capable of doing.

How do you handle the arguments and fights?

Bayo: Thankfully, both of us are very timid, I do the shouting most times and she just keeps quiet but once she is silent, I would try as much as possible to resolve issues amicably and apologise whenever I am at fault. Most times I would still want to be the man even when I am at fault, but at the end of the day after my shouting act, I would calm down and call her to myself.

Yinka: He is a strong man. He will always want to assert himself. As a woman, I will sometimes want to nag, when I start my nagging, he would be quick to remind me of how much he hates nagging, that would make me control myself immediately.

She stays in Abeokuta while you stay in Lagos, how do you cope with the distance?

Bayo: When I am working, I stay in Lagos but when I am not working, I am home in Abeokuta which is not far from Lagos.

Yinka: Since we are raising the children in Abeokuta, I have always preferred to be in Abeokuta. . If we were based in Lagos, he would still have to travel because his job takes him to a lot of places. It is not really a barrier. What matters is wherever he travels to, he always comes back home and makes his family happy.

Your work involves being around a lot of females, how does she cope?

Bayo: It does not bother her at all, not that she does not react. I could call one lady for more than two times and my wife could just make a passing joke about the issue and that would be all. Of course, she knows all my male and female friends and she trusts me that I do not overstep my boundaries. She also understands that my profession exposes me to many people – both males and females.

Yinka: As long as he doesn’t bring them home, I have no reason to worry. Sometimes, I listen in on his calls and I read his messages but such things do not affect my emotions because I have the understanding of the kind of job he does and I know that he interacts with all kinds of people on a regular basis.

How is the romance now that it is 10 years and there are children involved?

Bayo: Working far apart helps the romance a lot. I can be away for a week and during that period, my mind would be occupied with the desire to see my family. On her part too, she is always looking forward to seeing me whenever we are apart for a certain period of time.

Yinka: The romance is still hot and getting better. We are not tired of each other.

What does he do to make you angry?

Yinka: In the past he had the habit of shouting and that always got me very angry but these days he is learning to control himself.