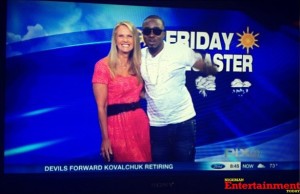 9ja rapper Ice Prince has been on a whole different level since winning the BET Award for ‘Best African Act’ in late June.

The rapper had the privilege to present the official weather report last week on popular TV station in New York City, WPIX, channel 11.

The WPIX’s studios and offices are located at the Daily News Building in Midtown Manhattan, and its transmitter is located atop the Empire State Building.

The Chocolate City rapper has been living a very chocolaty life of late, busy doing one thing or the other and all in the U.S.

He is presently working with Bad Boy Records/MMG rapper French Montana and performing at several gigs.